The second in my COVID Fall Series of State Highpoints took place in New Hampshire on the glorious Presidential Range.  This prominent peak was my primary reason for coming to the East Coast from the very beginning.  Vermont’s highpoint was only added at the last minute when I saw how close it was to where we flew in… and I tried to wiggle Mt. Marcy in as well, but my family’s interest in hiking isn’t nearly as deep as mine so I had to let that one go and save it for another time.  Honestly, I was happy to get such a willing response about Vermont.

After hiking Mt. Mansfield the day before, my brother-in-law (Paul) and I drove over to meet up with our wives at a nice cabin we rented in Carroll, New Hampshire.  The original plan was for Paul and I to hike to the top of Mt. Washington while our wives took the Cog Railway up to join us for lunch.  This would obviously take some careful calculation to arrange our travel times to coincide.  I knew that was going to be a tough one to estimate since we didn’t move as fast as I thought we would on Mansfield.

On our way to New Hampshire that afternoon, Paul said “I don’t think I’m going to make it with you tomorrow”.  Of course this was bummer news to hear, and we talked about it a bit, but I think that decision probably turned out to be the best for both of us since the day on Mt. Washington turned out to be a BIG one… bigger than what I had initially planned, but was completely prepared for. 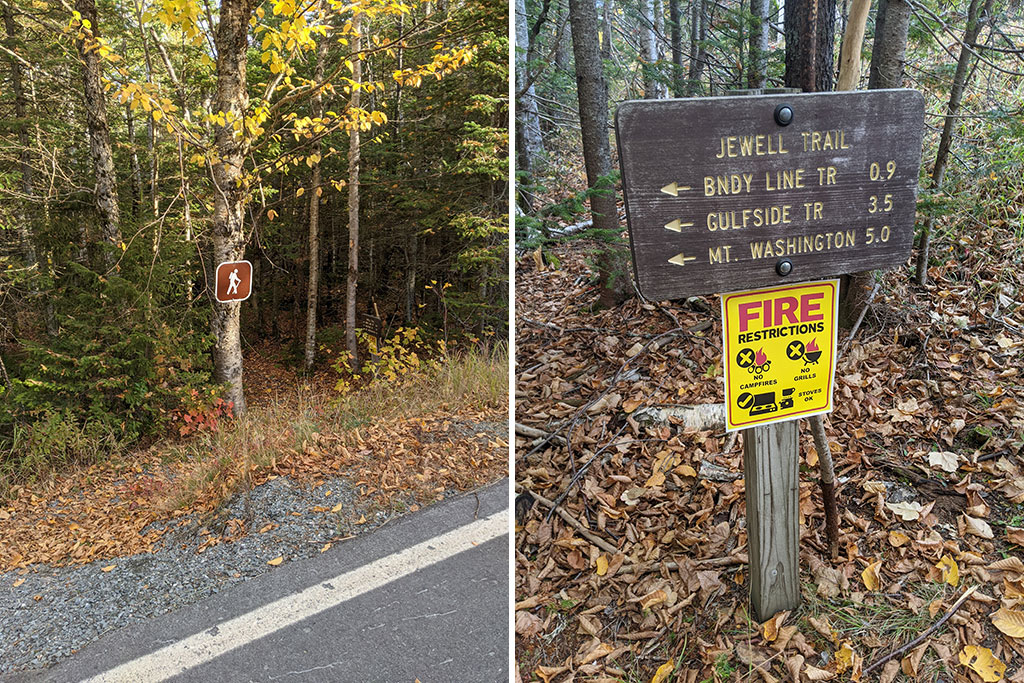 Directly across the road from the Ammonoosuc Ravine trailhead parking lot, I took off up the Jewell Trail by myself at 9am.  This is a well-marked trail start, unlike the one we experienced the day before in Vermont. 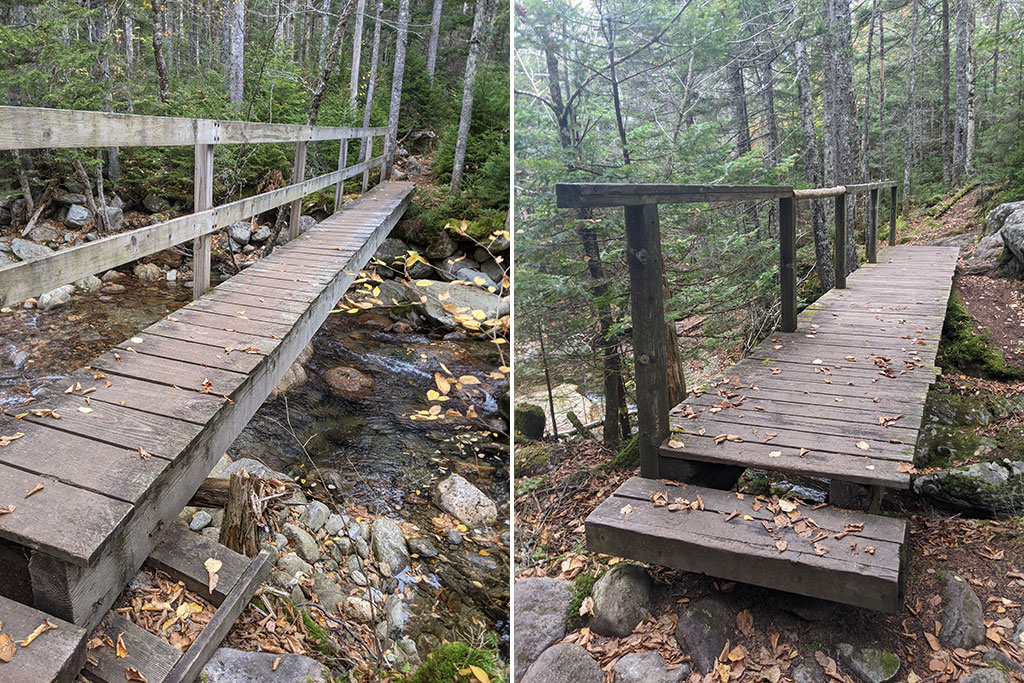 You cross two rivers within the first mile; the Ammonoosuc River a quarter mile in (pictured right) followed by Clay Brook at the 1-mile mark (pictured left). 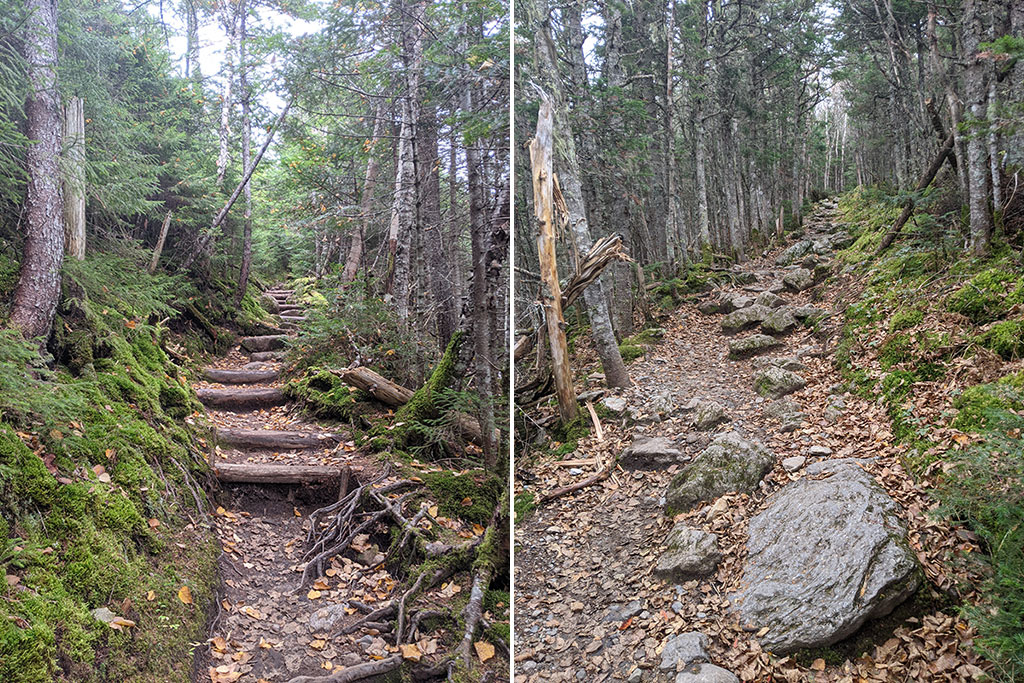 The Jewell Trail is a steady climb through the forest, gaining about 2,900′ in the first 3 miles.  Sections of this ascent are a stairway of log steps while other parts rise over rocks.

As you approach the Alpine Zone (aka treeline), you will find yourself pretty close to the 3-mile mark.  If the weather is good, you should be able to see Mt. Washington from here.  Unfortunately, that wasn’t the case for me as you can see here. 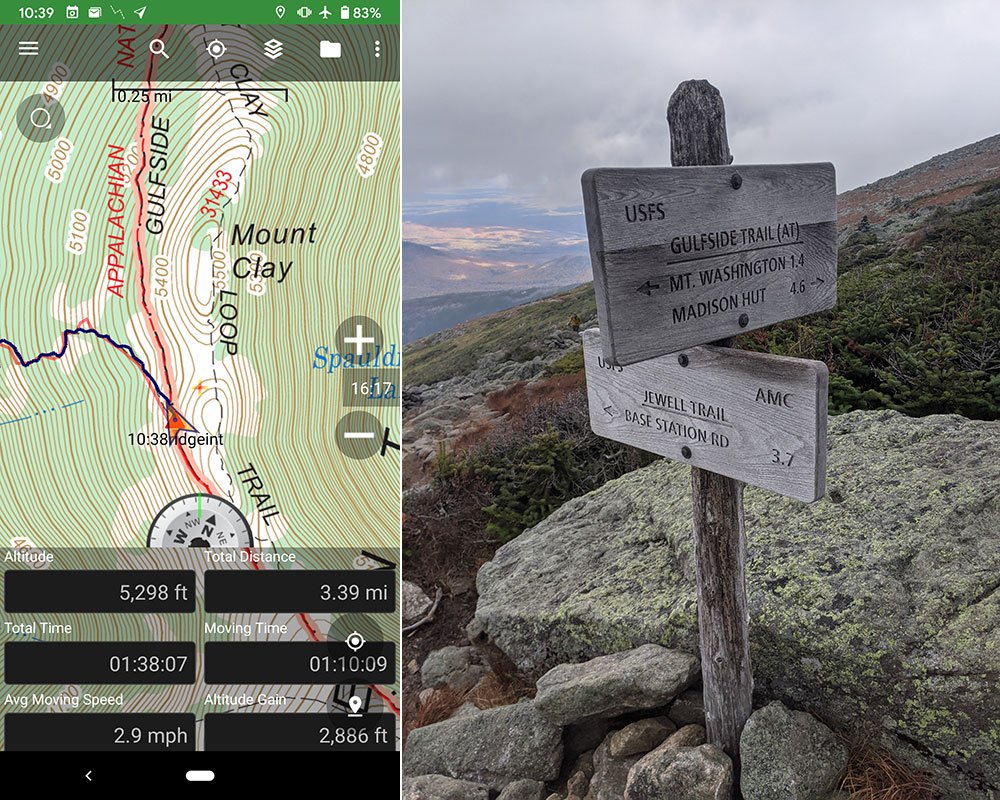 At 3.4 miles up, I reached the intersection of the Jewell and Gulfside trails in 1 hour and 40 minutes.  At this point, I was more than 2 hours ahead of schedule.  That “schedule” was to meet up with my wife and sister-in-law at the summit at 1p.  They both had pre-reserved tickets to ride the COG Railway up to meet me for lunch.  I gave myself 4 hours to reach the top given all that I read about how tough this was going to be.

However, I was only a mile and a half away from the summit and didn’t want to wait there for a hour or more without any kind of view.  So I decided to take a quick detour over to hit Mt. Jefferson.  I was pretty sure I could make it there and back to this same intersection in 2 hours. 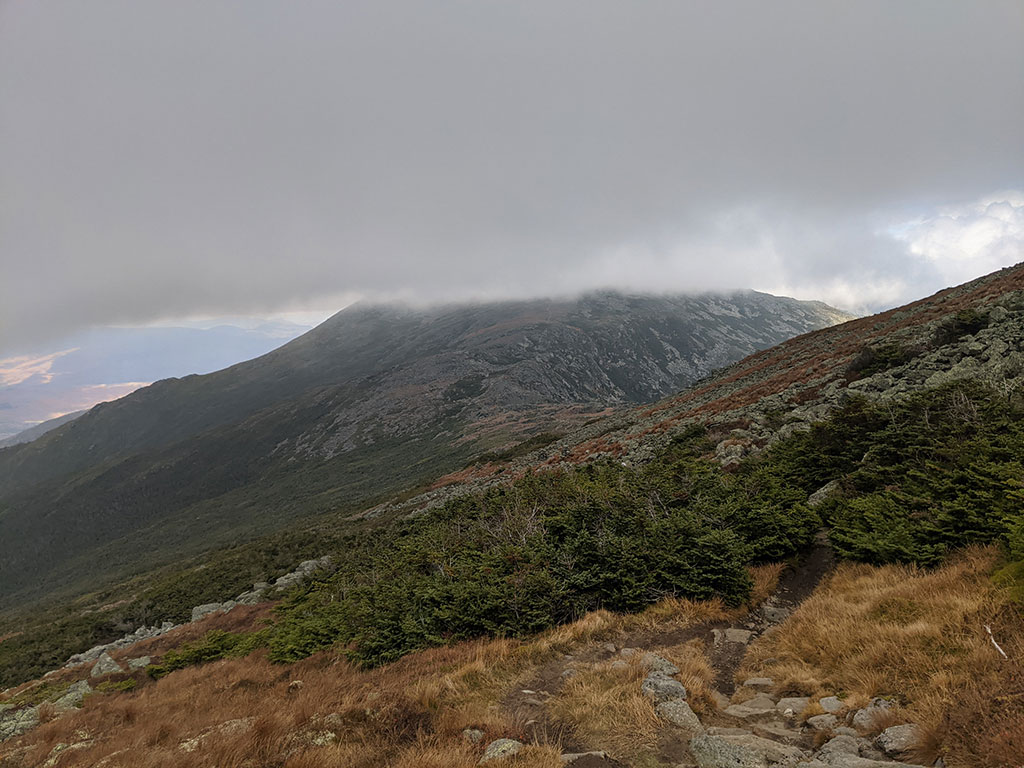 So off to the summit of Mt. Jefferson I went, also hidden behind thick clouds. 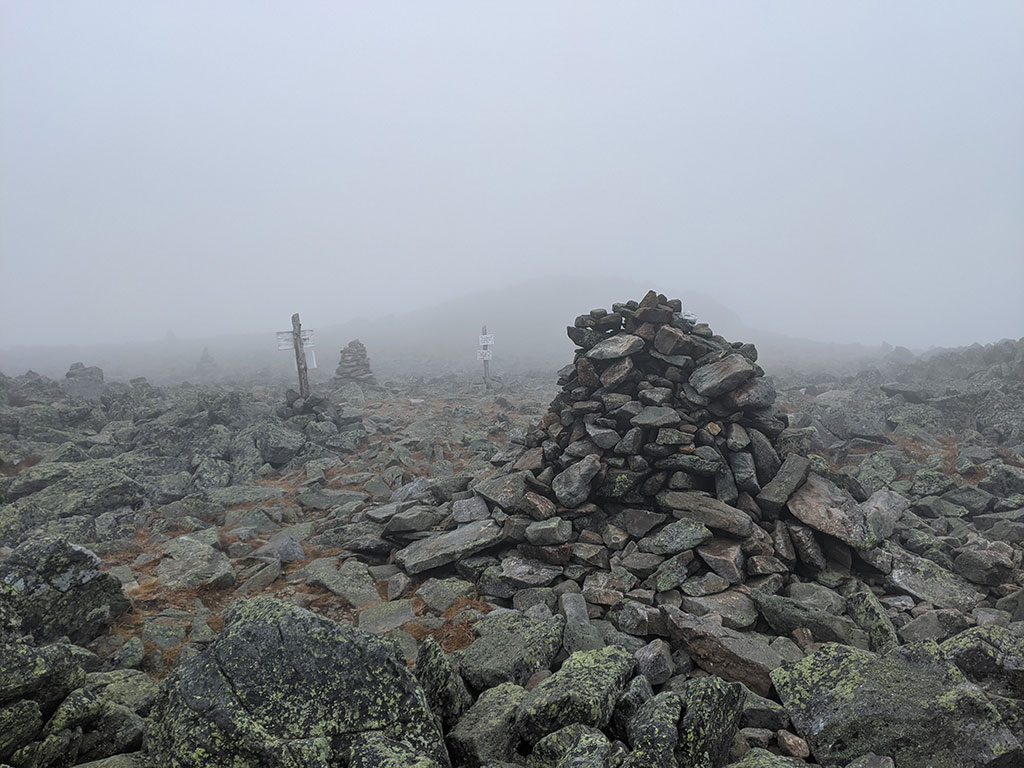 The signs and cairns were pretty easy to follow along the way, even in the fog… but I guess this is the Appalachian Trail after all! 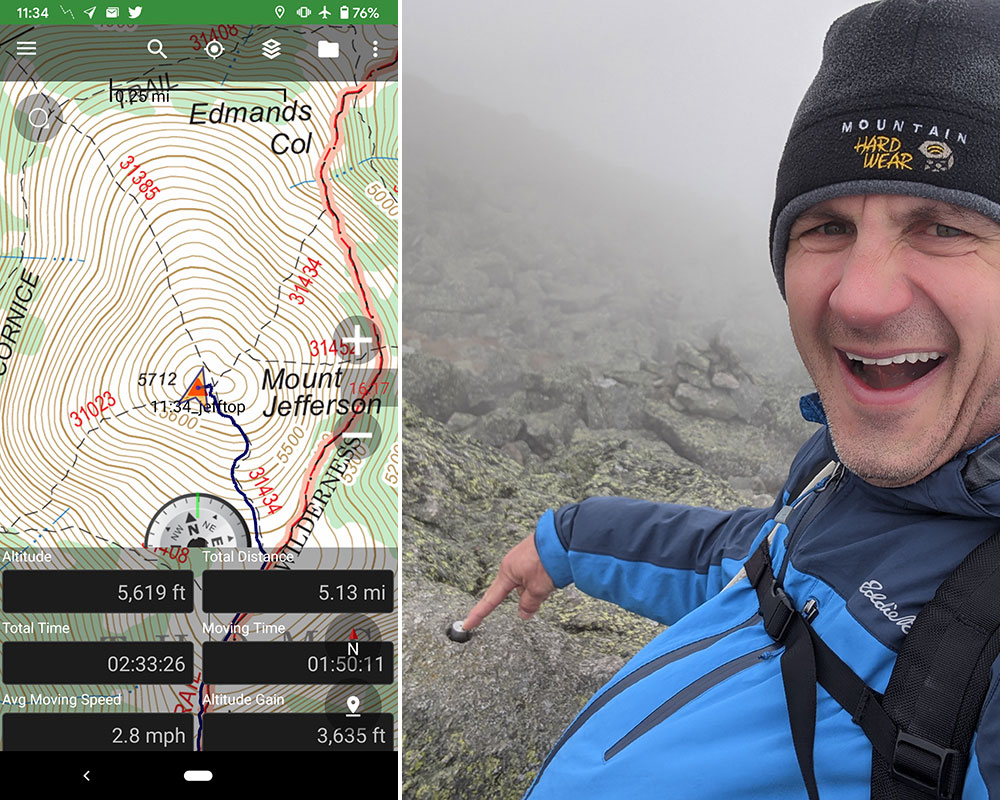 An hour from the Jewell/Gulfside trail intersection, I hit the 5-mile mark on top of Mt. Jefferson.  There wasn’t much to see and not even a decent summit marker.  I assumed that “button” was the peak marker because there was nothing higher on that hill.

So with no time to waste and no view to enjoy, I had an hour to get back to that intersection I deviated from to come grab this bonus peak.  If I didn’t need to meet anyone for lunch and the visibility was more favorable, I would have gone over and tagged Mt. Adams too! 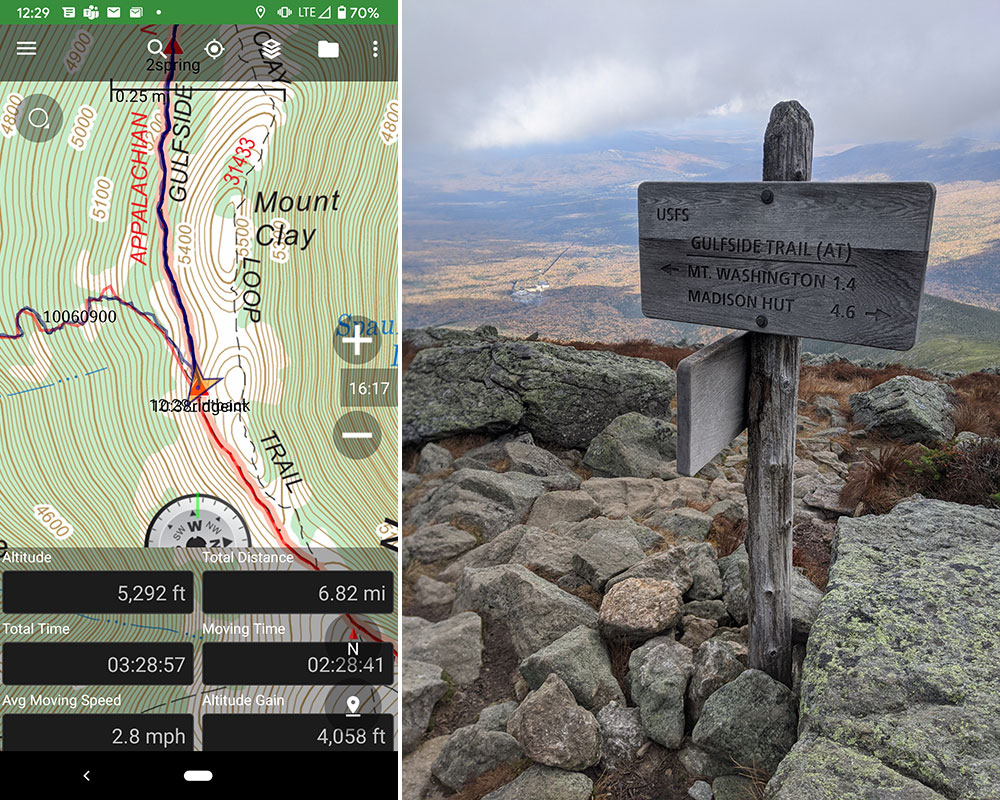 It was 12:30 by the time I got back to the intersection of the Jewell and Gulfside trails, 2 hours from the time I left from here to go get Jefferson.  Everything worked out to keep me on track to hike the last mile and a half to meet my wife at the summit by 1. 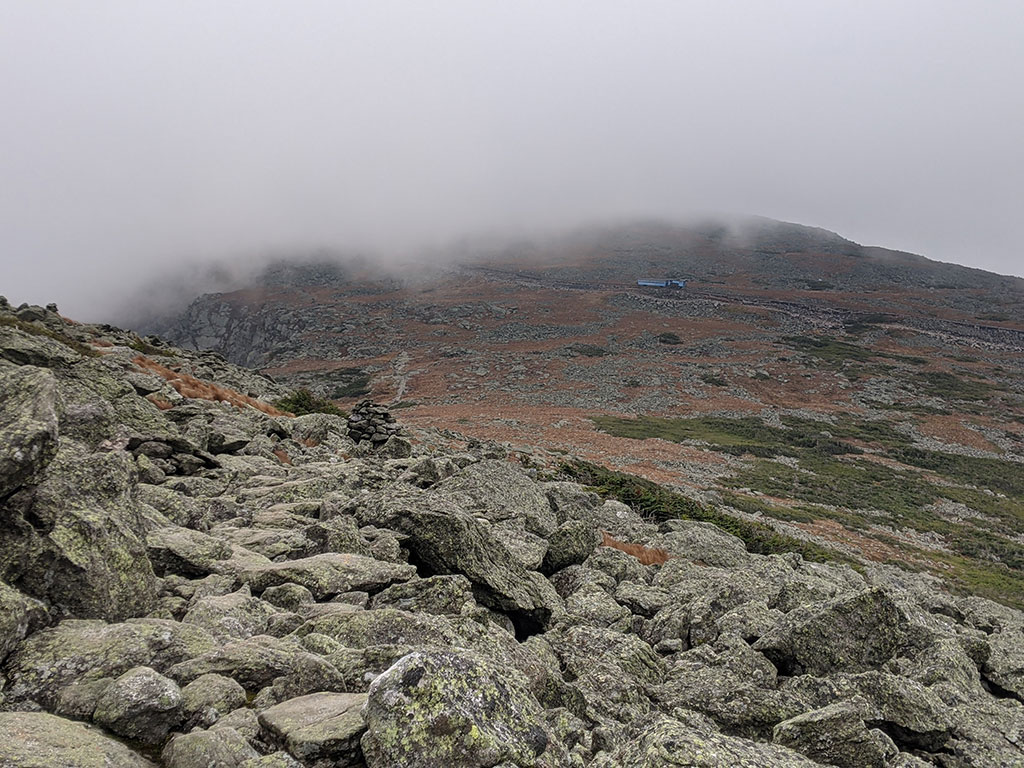 When I came around Mount Clay and saw the Cogs coming up the opposite side of Burt Ravine, I texted my wife and asked which color she boarded… she was on this blue one.  I had to hustle now because I knew she would reach the top before I did! 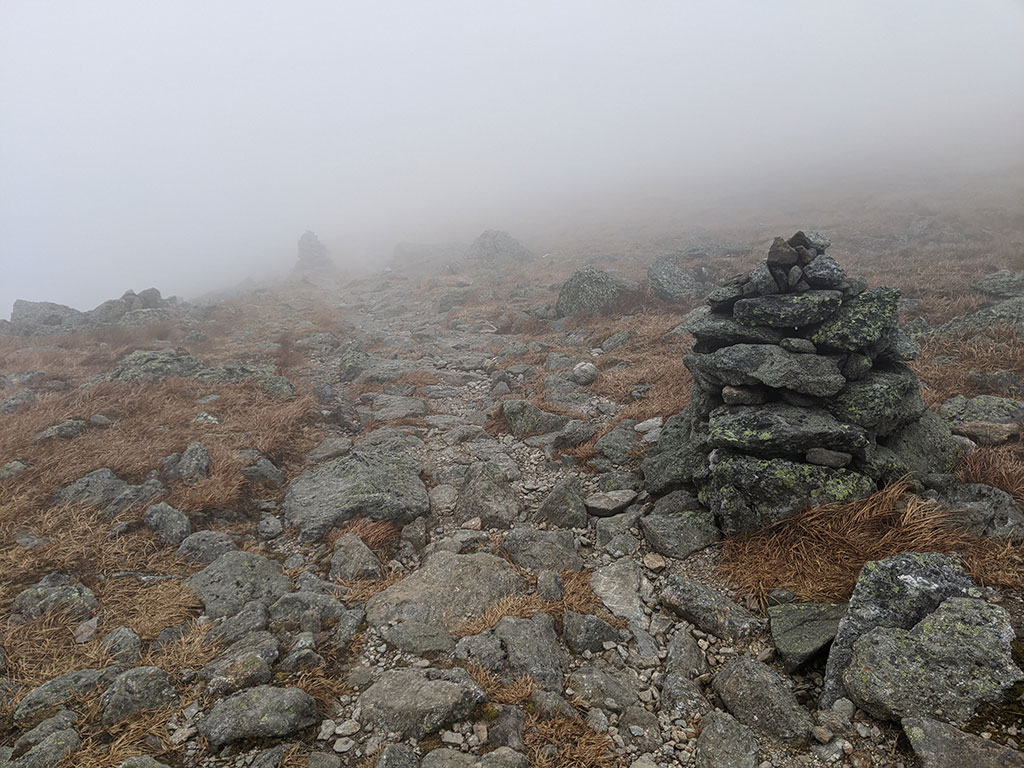 I was only a mile away at that point but the trail was still pretty socked in.  These large pile of rocks, called cairns, continued to mark the way up. 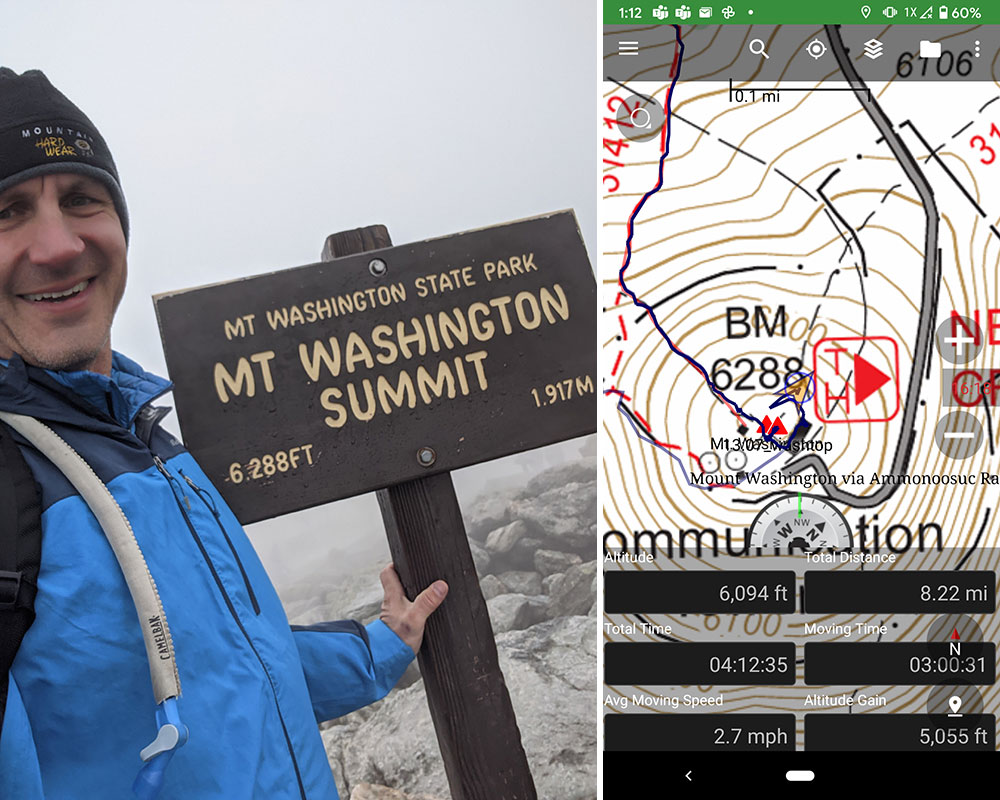 Just shortly after 1, I reached the summit 12 minutes late for my “lunch date” after 8 miles and 5,000′ of total elevation gain so far.  You couldn’t see much, but it was still awesome to be up there!

My wife only had to wait for about 15 minutes but her view from the Sherman Adams Summit Building was amazingly white!  Everyone was also supposed to have a reservation to enter this facility due to restrictions placed upon us by COVID, but no one asked to see her ticket nor mine.  All services were closed due to this pandemic, so our lunch plans were foiled as well. 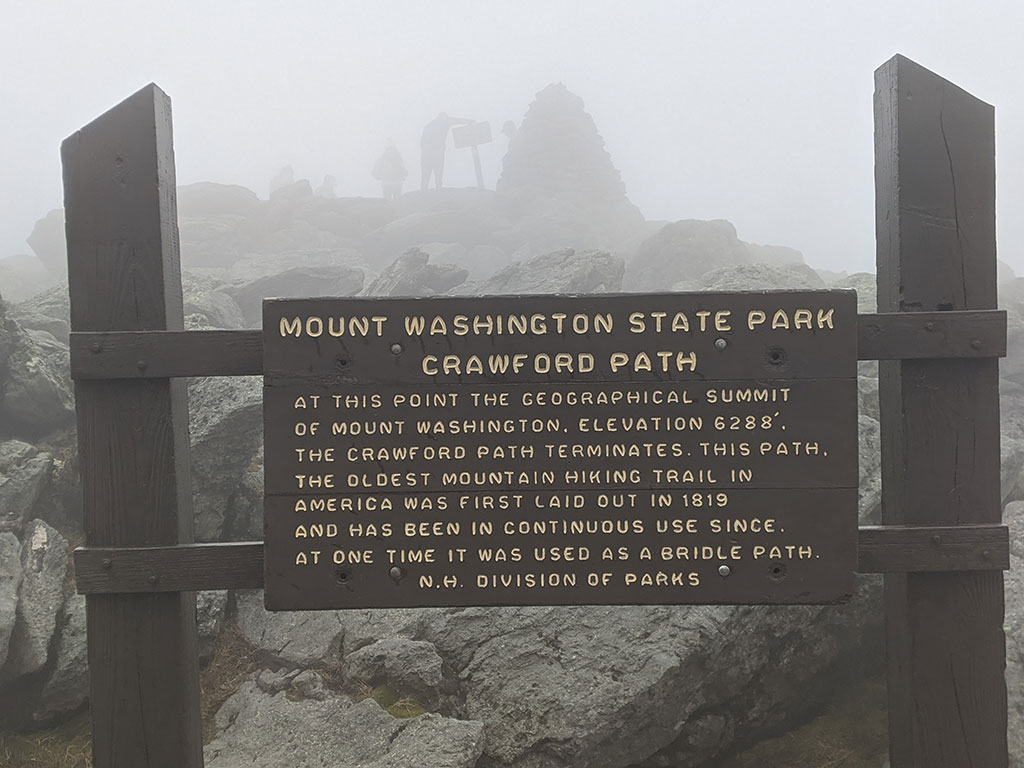 Not only was it cool to be on the Appalachian Trail but also to learn that this section is the oldest hiking trail in America. 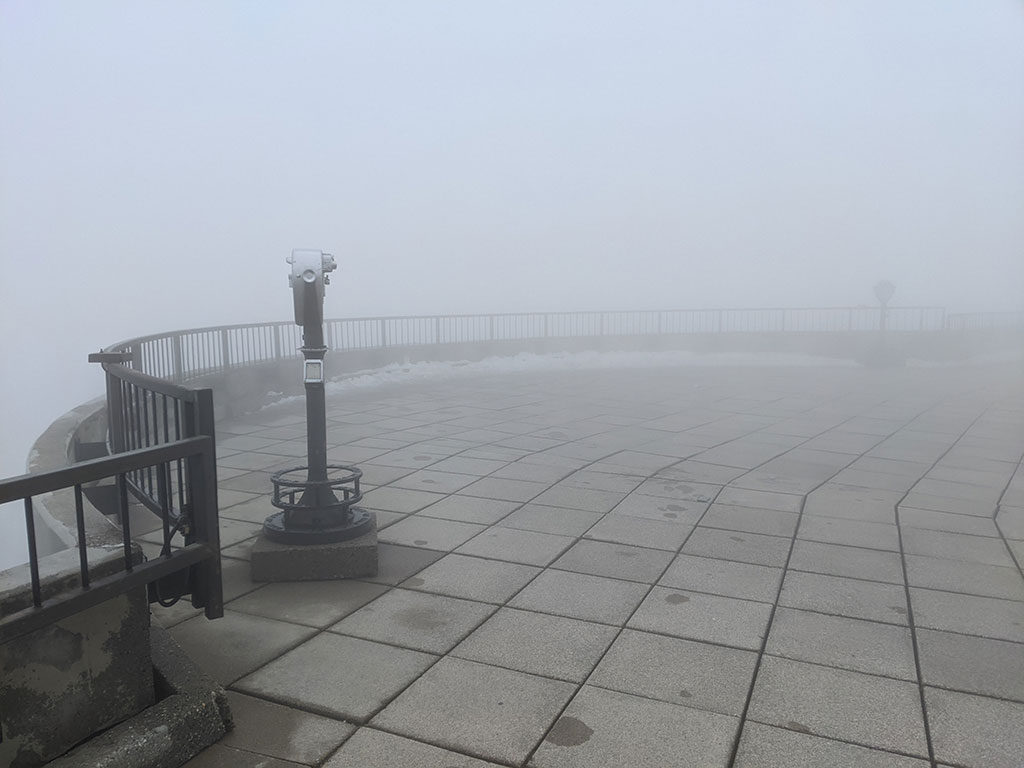 It’s too bad the weather wasn’t all that great… but I hear it could have been worse, much worse.  With everything closed and not much to see, I bid farewell to my wife and began down the Crawford Path to Ammonoosuc Ravine. 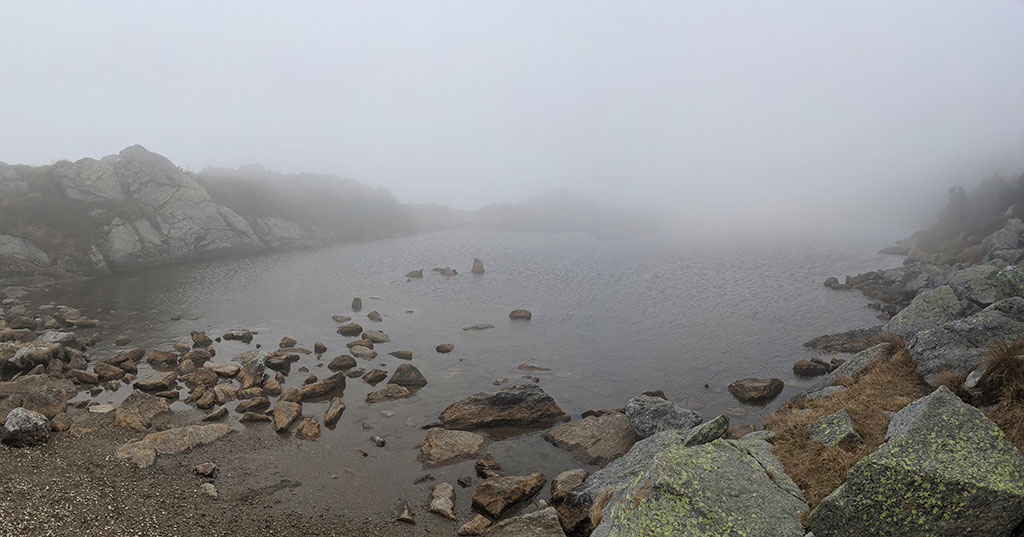 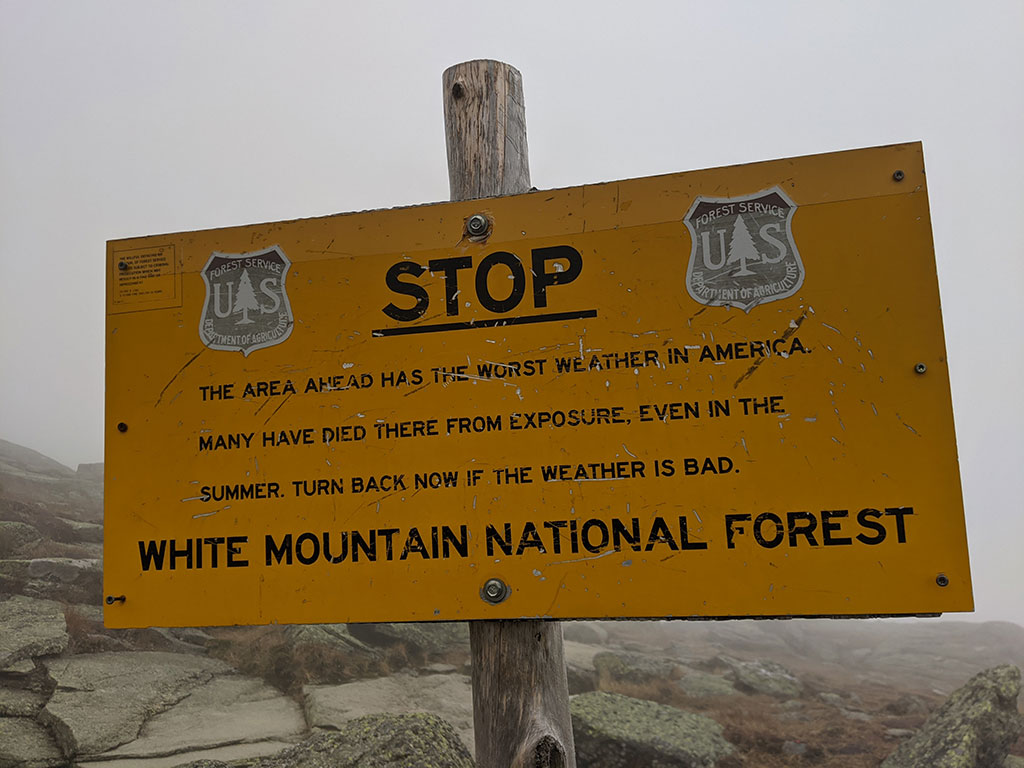 Not far down along the Crawford Path is this warning sign.  I had been told by many that Mt. Washington is notorious for sudden weather changes.  In fact, this peak still holds the record for highest measured wind speed not associated with a tornado or tropical cyclone at 231 mph!

Get the current summit condition from the Mount Washington Observatory. 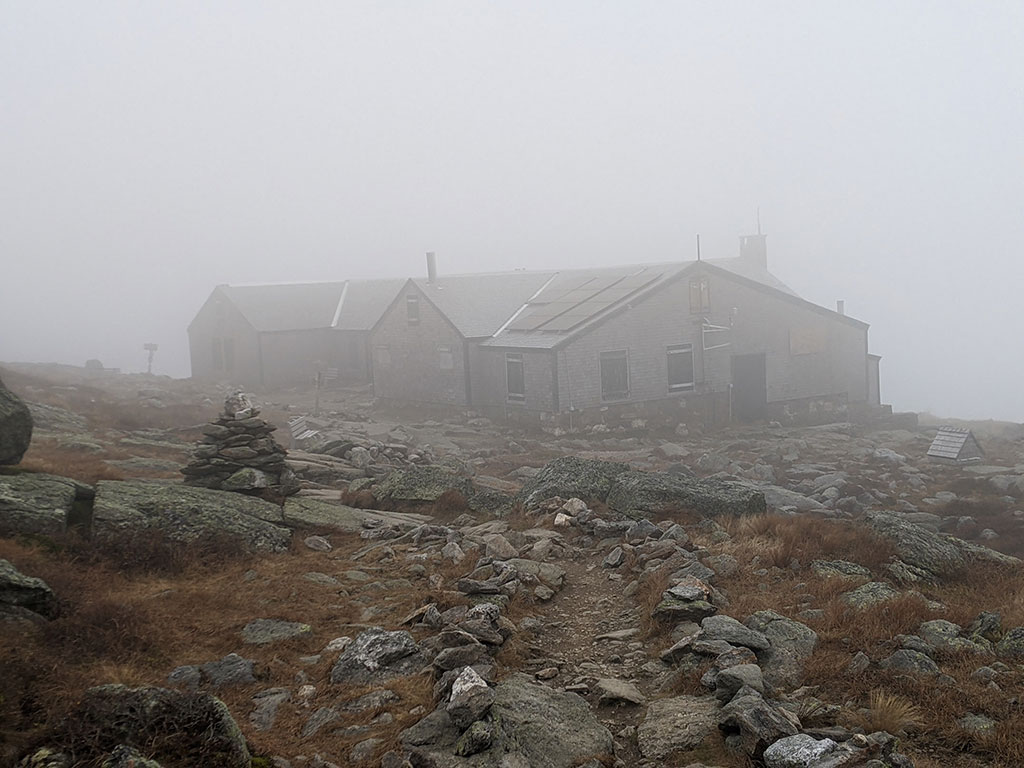 At the intersection of Crawford Path and the Ammonoosuc Trail you will find the Lakes of the Cloud Hut.  Someone told me this bunkhouse is available for overnight stays but wasn’t sure if it was closed from COVID or for seasonal reasons.

I also met a family here sitting on the benches taking a rest.  As we got to talking, I found out they were not on their way over to Washington but had just come down from Mount Monroe.  This caught my interest when they told me it was only another half mile up from where we were standing.

I was approaching 10 miles by this time and still feeling great.  So what’s another mile and another peak, I thought.  It would make three 4,000 foot peaks in one day for an unexpected New Hampshire Trifecta! 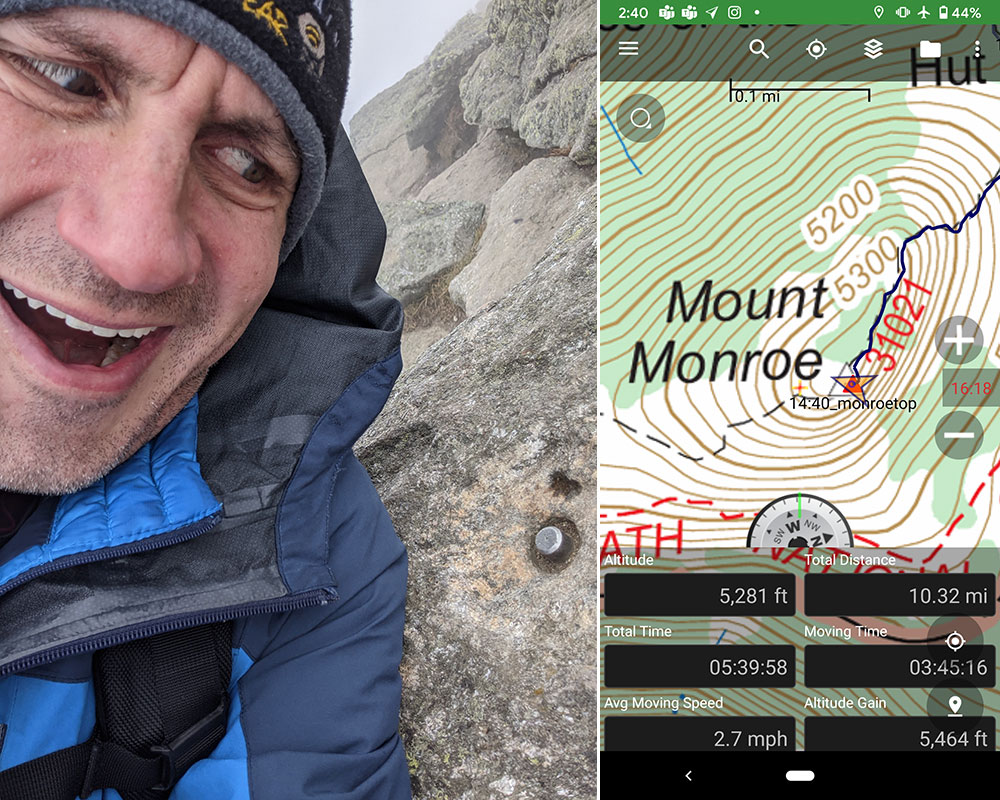 15 minutes after leaving the hut, I was on the “top” of Mount Monroe as indicated by another button! 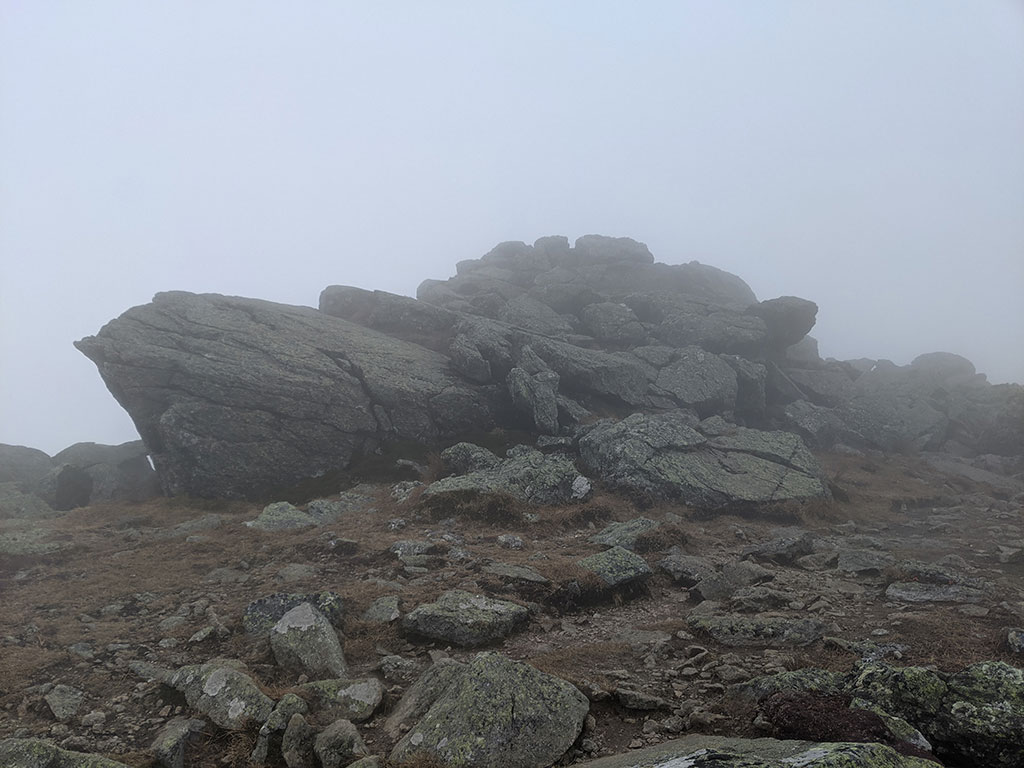 The top of Mt. Monroe wasn’t all that impressive, but who knows what views lie beyond this thick dense fog.  Looks like I’ll have to come back and find out another time.  Either way, the rest of the day was all down hill from here. 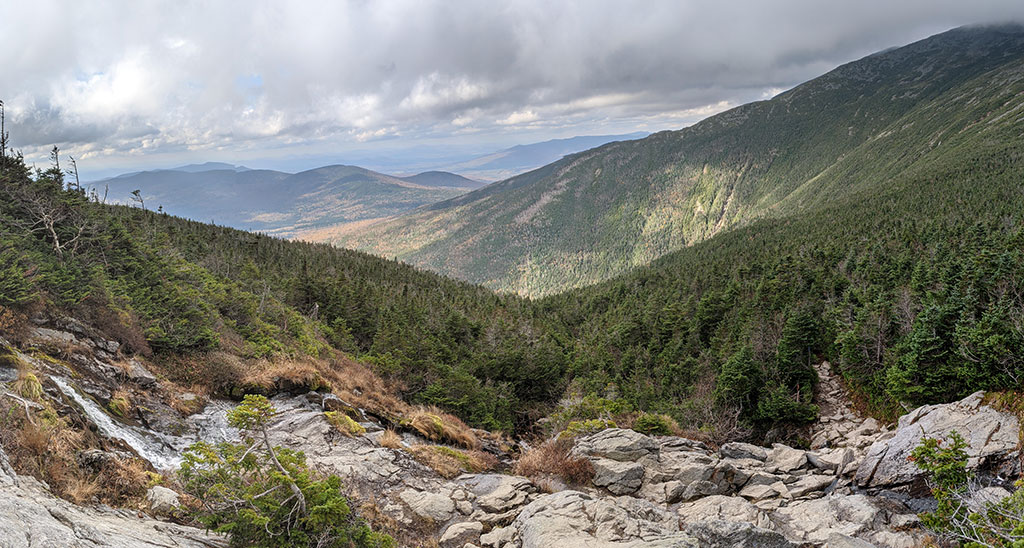 The further away I got from the top, the better the weather became.  This was taken on the way down through the Ammonoosuc Ravine.

This was trail was steep, very steep…like nearly 1,700′ of elevation change in 1 mile!  That made me very grateful for the way I chose to take up. 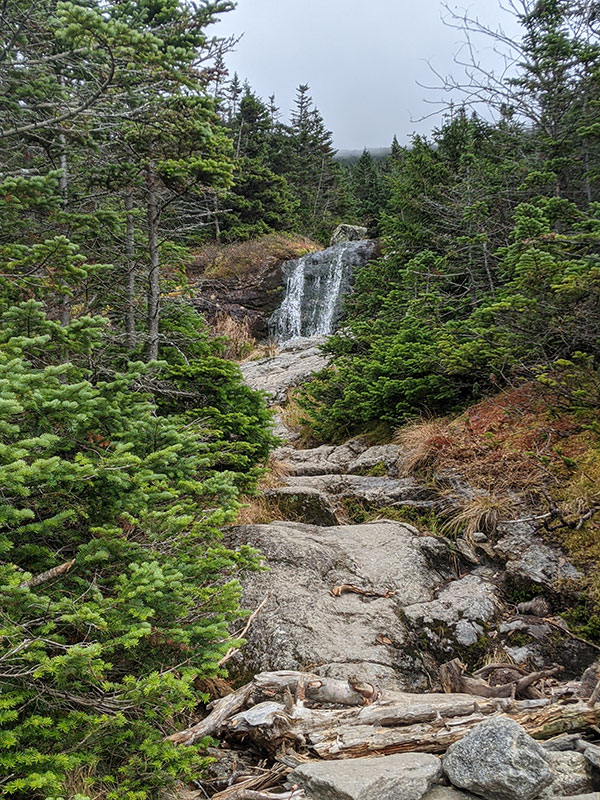 But this trail followed the Ammonoosuc River with waterfalls most of the way down. 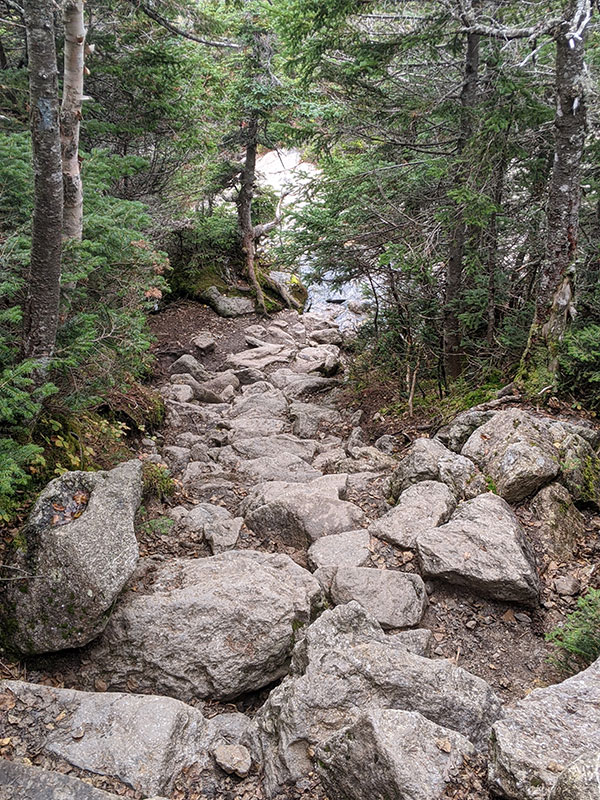 There also was no shortage of rocky steps down… 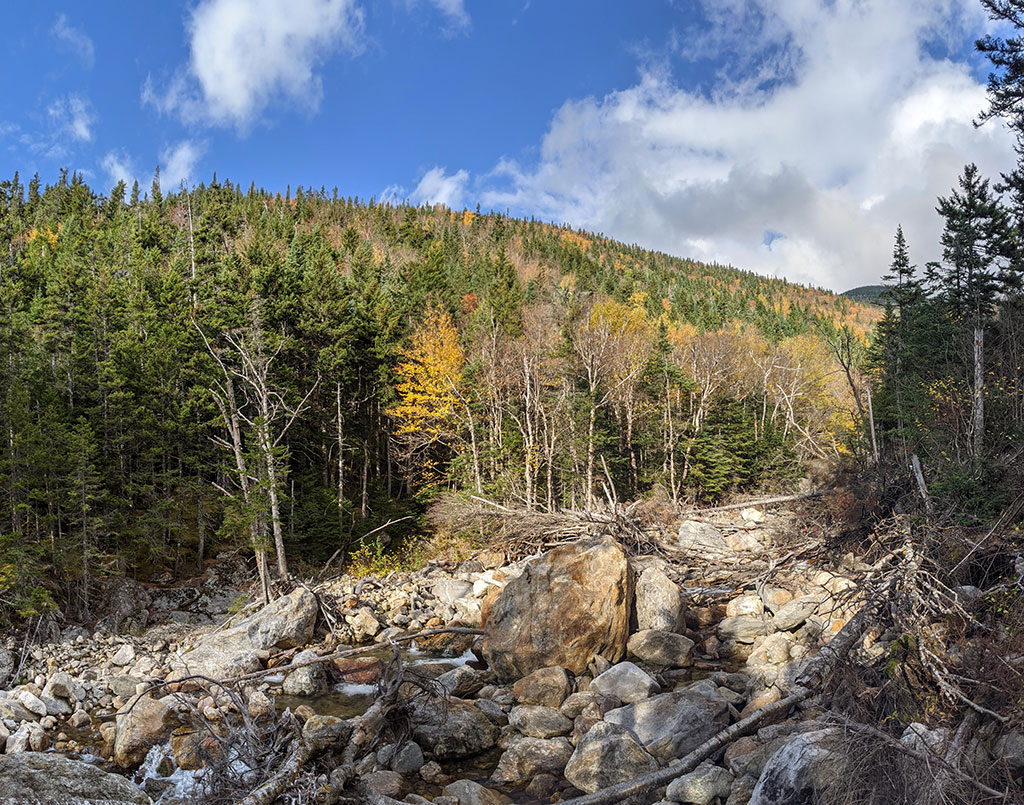 …and the Fall colors were in full force. 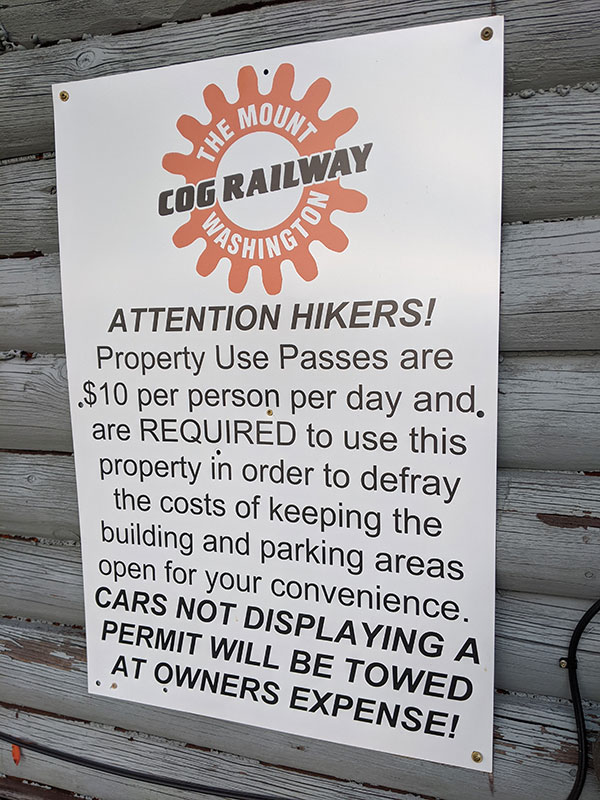 There are 2 other trailheads up a little closer to the Cog’s Base Station but make sure you pay the parking fee or you may come down to find your car gone. 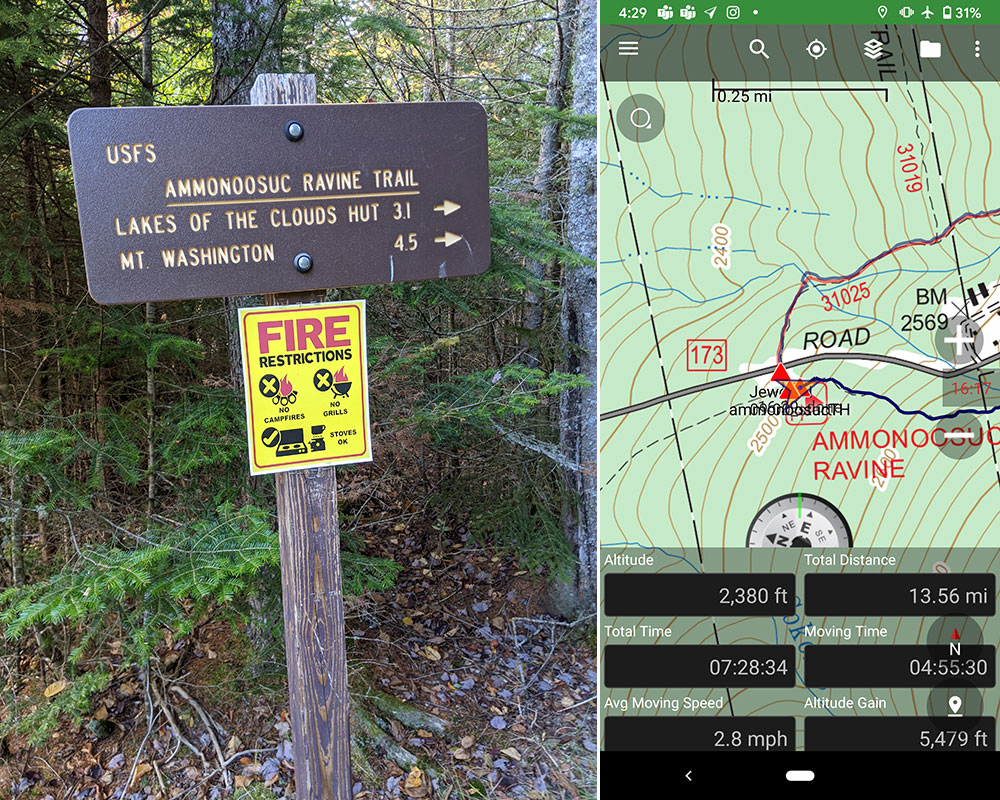 Final stats for the day: 13.5 miles with 5400′ of elevation in about 7 hours (not including the half hour I spent at the top with my wife).