Nice reminder from Miss Adventure Pants of things we need to pay attention to as we begin this winter backcountry hiking season!

MYTH #1: Avalanches aren’t a big problem in the Lower 48 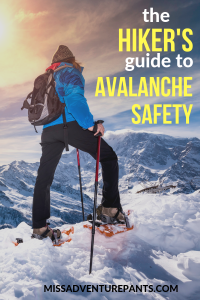 MYTH #4: Staying off steep slopes will keep me safe

MYTH #5: Following the boot pack will keep me safe

MYTH #6: If the avalanche forecast is moderate, I don’t need to worry

MYTH #7: If I’ve taken an avalanche course, I don’t need to worry

MYTH #8: If I have avalanche gear, I don’t have to worry

MYTH #9: Avalanches aren’t dangerous in the spring and summer

MYTH #11: If I’m caught in an avalanche, I’ll dig myself out

I couldn’t agree more with her point that “developing your avalanche judgment is an experiential, lifelong endeavor.”  There are so many complex factors involved (from snow to human) that make this such a challenge.

I also think it’s also super important to “choose like-minded companions”.  I’ve snowshoed with a few people that have demonstrated a sketchy sense of avy awareness by some of the choices they were making.  It definitely made me nervous to the point where I will decline future invites from those individuals.