The first of my Summer Series of State Highpoints for 2021 turned out to be unsuccessful attempt of Mt. Sunflower.  After having done much harder highpoints with relative ease (CA, MT, UT, ID, NH), I never thought I’d be denied this one!

Our 4-state Highpoints loop started in Denver on Memorial Day with Kansas to be “the easy one”. 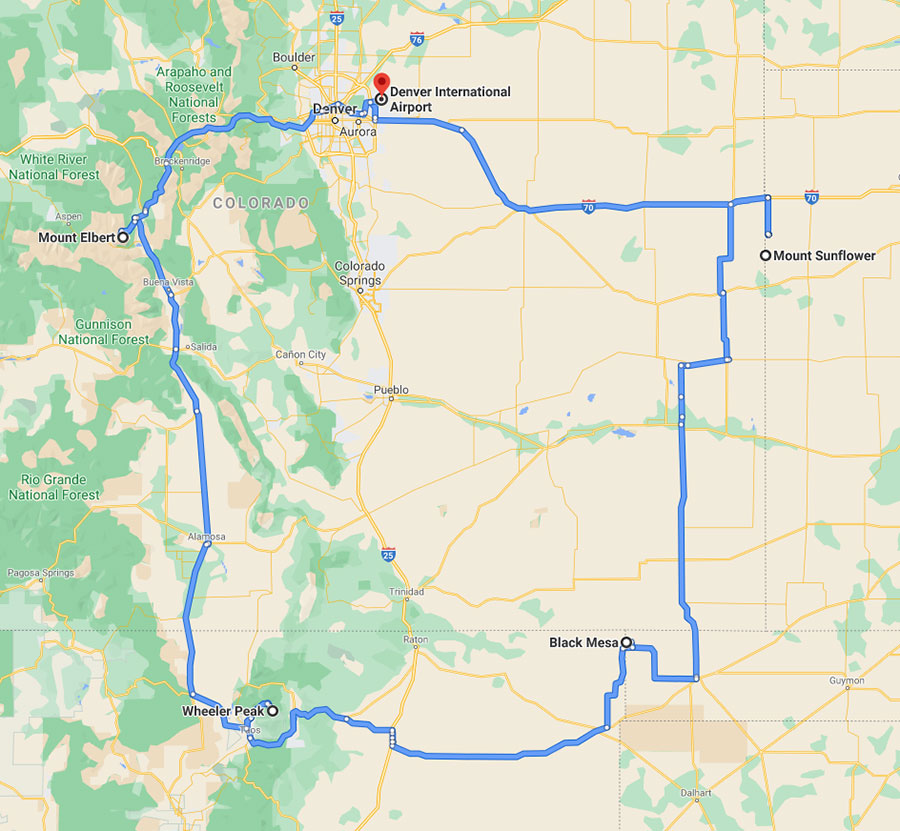 I knew the road to Mt. Sunflower was unpaved and read about it’s muddy condition earlier in the month.  My hope was for things to dry out by the time we would arrive 3 weeks later.  In fact, we left record-breaking heat in Salt Lake only to find gloomy skies as we drove out to Kanorado. 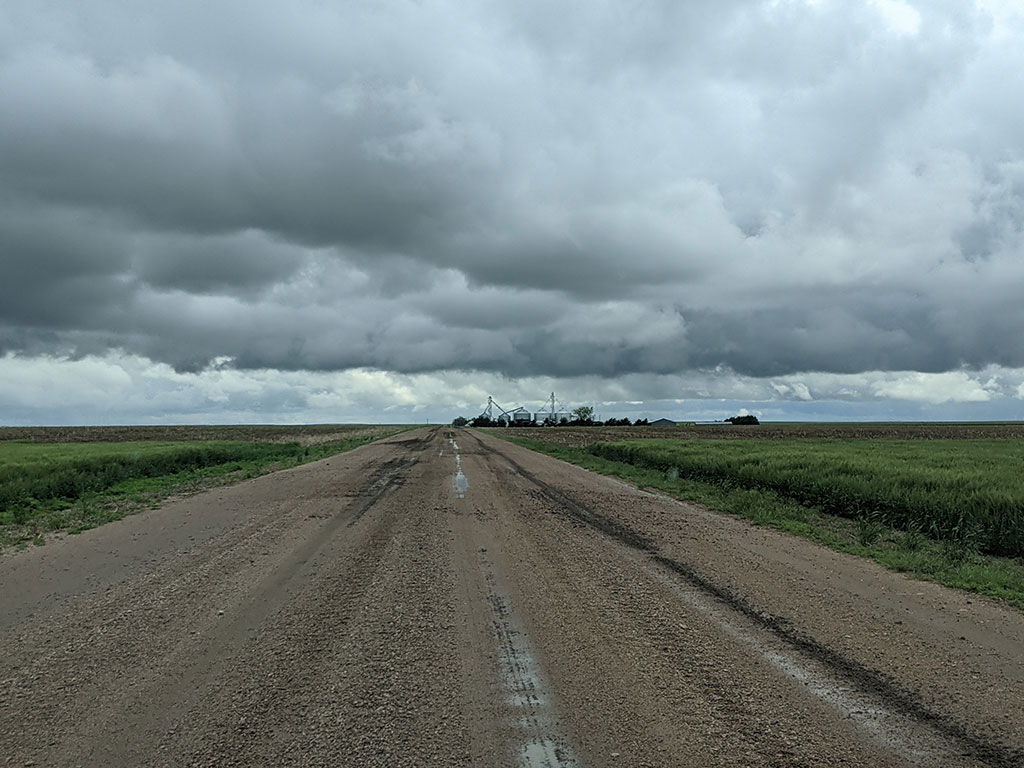 The further we drove, the deeper the ruts got.  We also couldn’t find the switch for Traction Control until we had already lost too much momentum.  By that time, the Kansas Clay had gotten us and confirmed that we shoulda paid extra for the Toyota Tacoma. 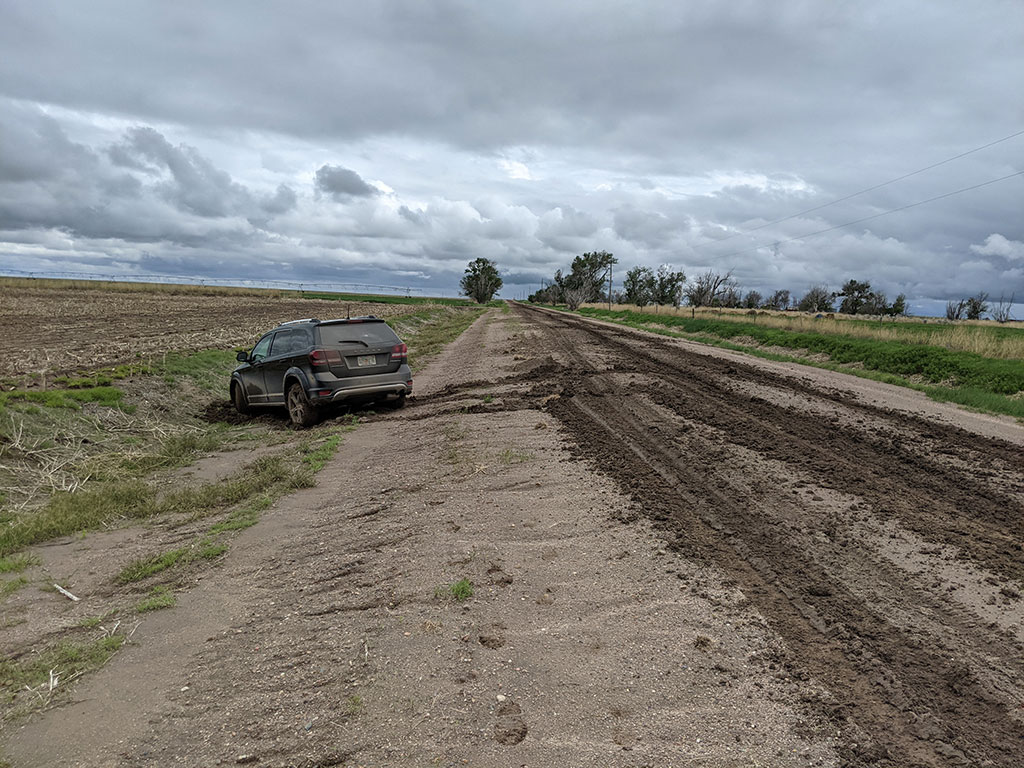 I like driving in snow but this Sunflower State Slime was nothing like that.  Rocking back and forth to clear the rut just wasn’t going to happen.  Instead, we just slid down into the ditch where I couldn’t even catch a patch of grass for some traction! 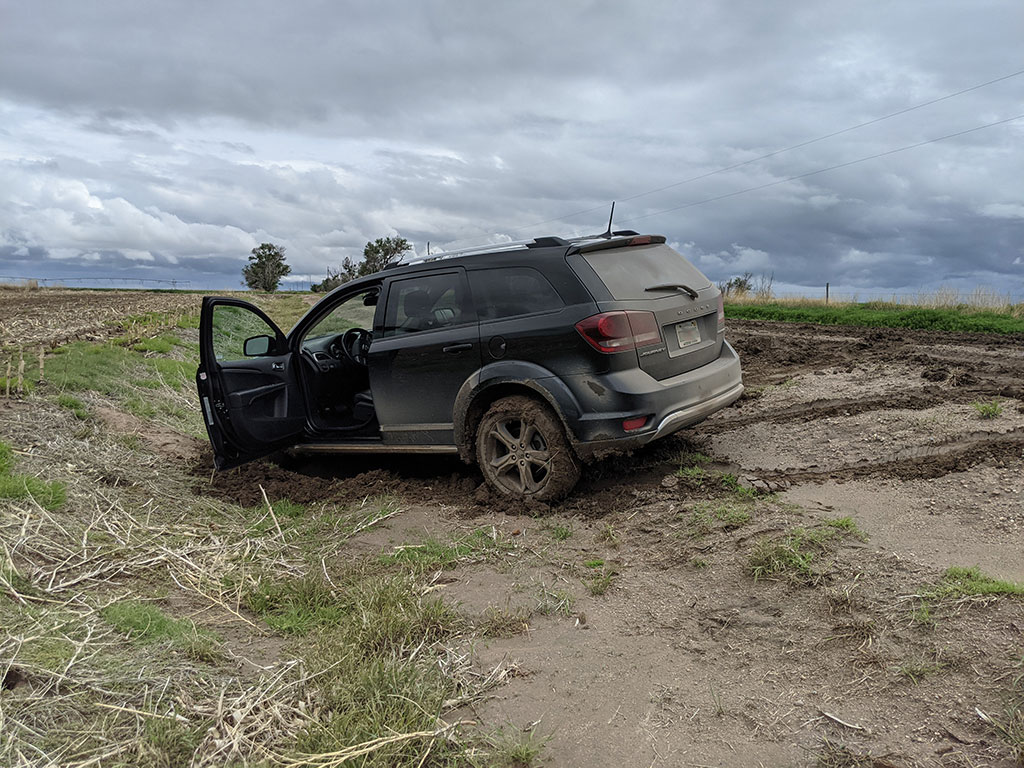 Luckily, we were only a quarter-mile down from someone’s house.  That good neighbor said we were the only ones to come down the road today and wondered how far we’d get.  He told us the road was fine until another storm came through just two days earlier.  That 3 inches of rain re-soaked everything again. 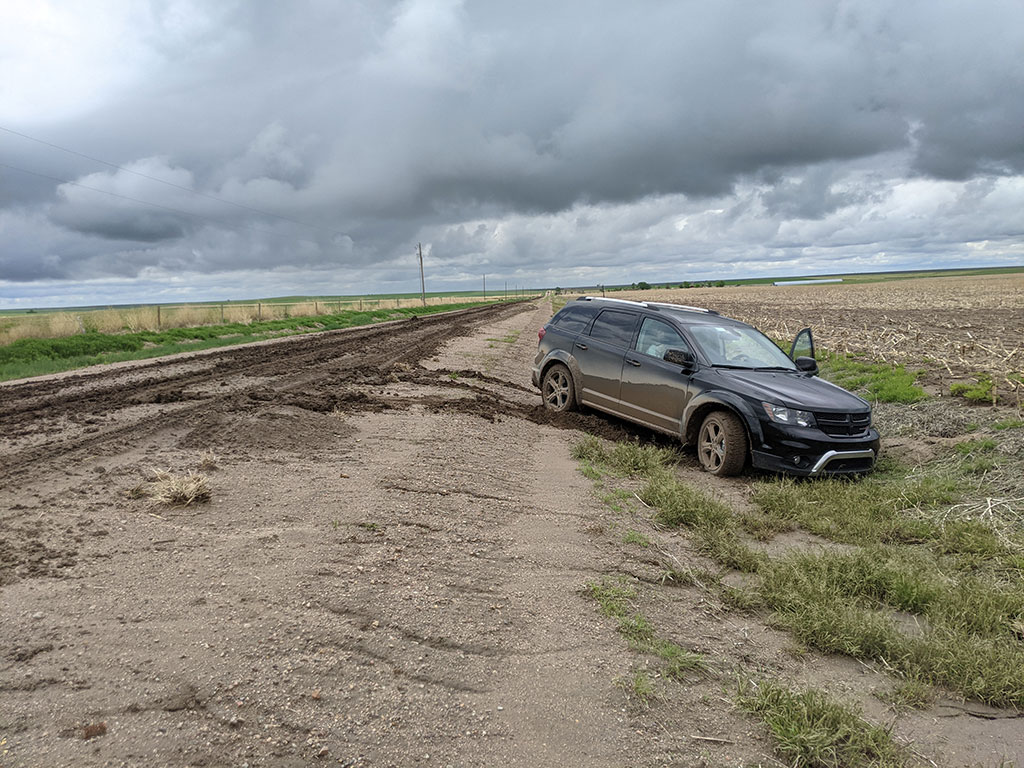 Once we were back on the road, our only option was to go back the way we came.  It was already 2 in the afternoon and we needed to move on to Oklahoma.  We also felt pretty fortunate that our situation didn’t take hours to resolve like another guy had experienced just a week before.  I think this whole fiasco only took us 40 minutes before we were up and going again. 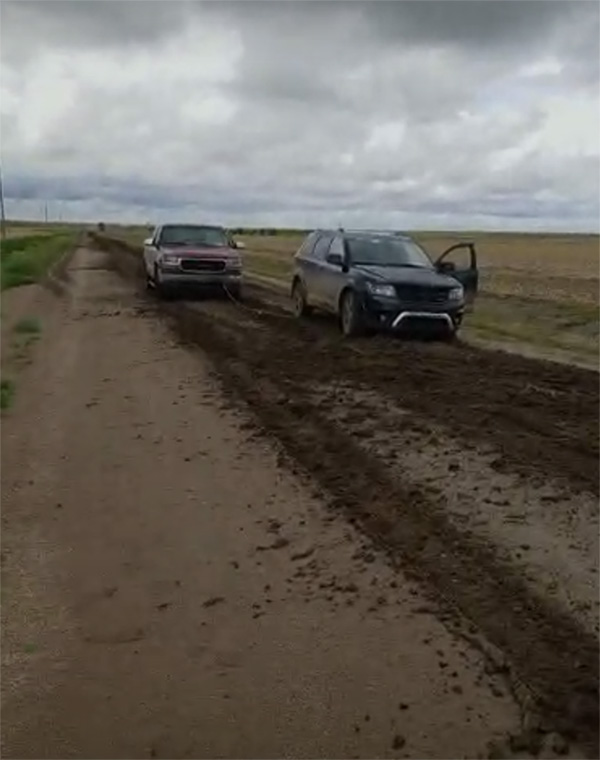 We plowed through 15 miles to get this far and didn’t feel like another 7 was too much more to make this highpoint.  However, our new friend said “the road only gets worse in these conditions with a few more challenging ups and downs ahead”.  We couldn’t risk getting stuck again, so back to I-70 we went.  As we traveled south on 385 to Oklahoma, I did notice County Road G as another possible way to approach this highpoint.  That road looked pretty muddy too and no shorter than what we had just narrowly escaped. 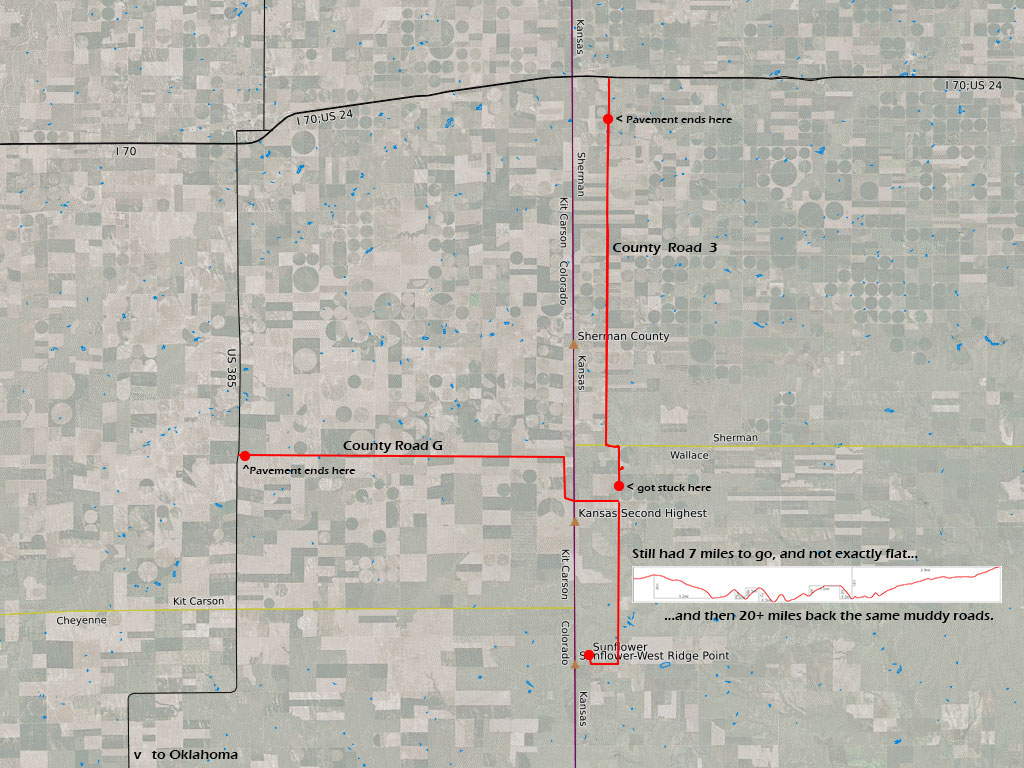 Eastern Colorado down towards Oklahoma couldn’t be flatter… and they say Highway 50 through Nevada is the loneliest road in America.  Hwy 385 should be listed as another. 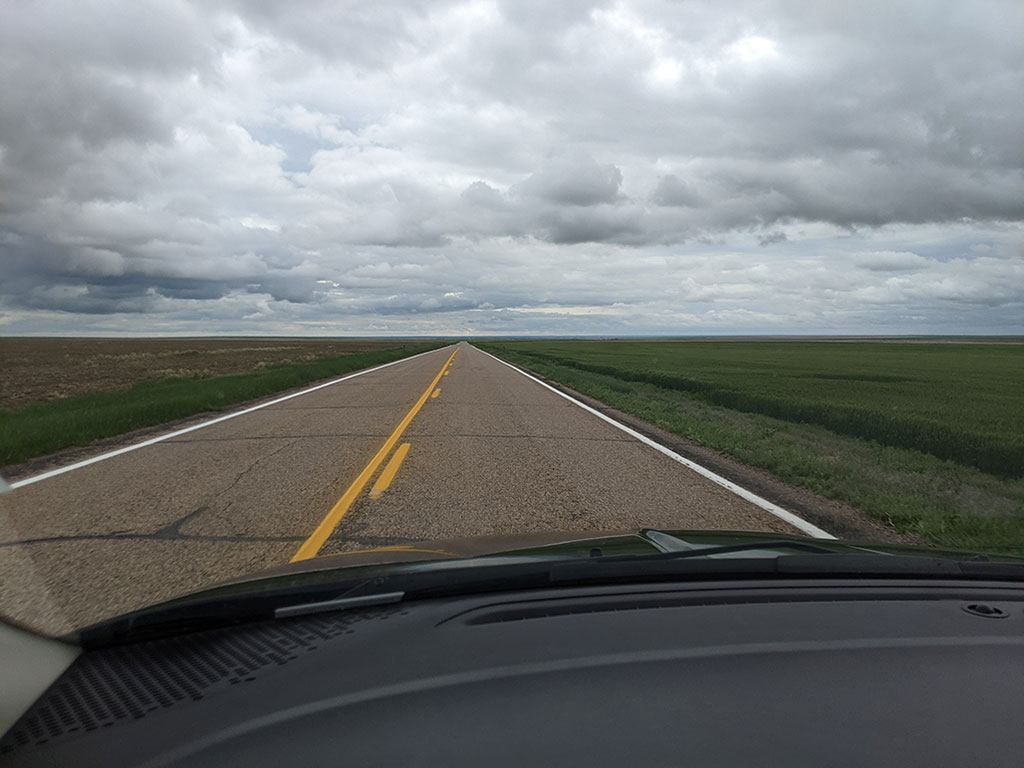 Not far down 385 was this “mount” to the east.  Apparently that’s not “Mount” Sunflower even though it looks like it should be. 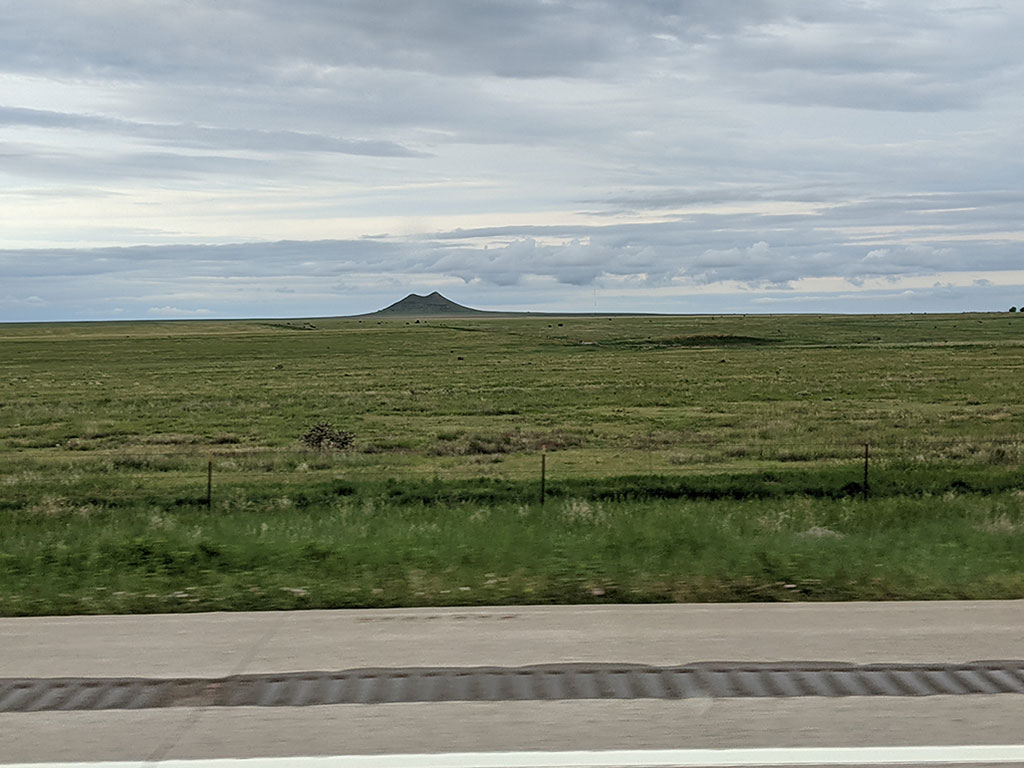 Kanas is surprisingly still on the To Do list with its own weather “issues” to be warned about!