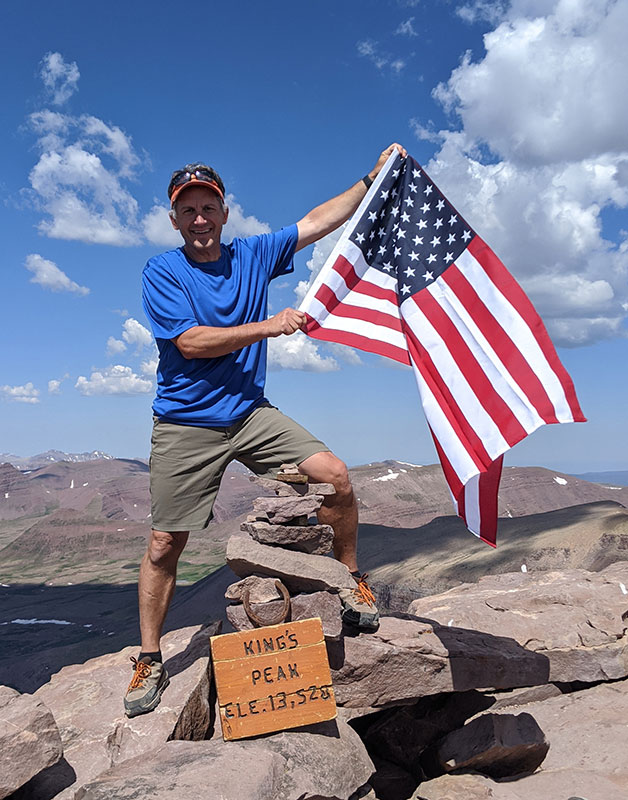 Here’s how our Utah adventure unfolded.

This was my 2nd time backpacking into the Henry’s Fork Basin to hike Kings Peak (and Chad’s first).  Each time we spent the first day getting ourselves to the Henry’s Fork trailhead and then hiking up to where we will camp for the rest of the weekend.  Work caused us to leave a little later than expected this time, but Chad and I were on the trail by 4pm knowing we still had plenty of daylight to get to where we wanted to be.

The Henry’s Fork trailhead starts at 9,400 feet and most people camp near Dollar Lake at 10,800′.  So the first 7.5 miles of this hike is only 1,400′ of gain that took us 3 hours to do.  However, we went up another mile or so to avoid this popular area.  I also suggested we position ourselves better to hit Gilbert using a potential “ramp” I noticed on my first time here in 2017.  Chad agreed without hesitation since his first 13ers would be all three of these in one shot!

Upon arriving at camp, we set up our tents, ate dinner, refilled water and got to bed early since tomorrow was expected to be a big day.  However, the first night is always a tough one for me to get any decent sleep.  My mind races about the next day’s adventure, every move in the sleeping bag is noisy, the wind blows tent flaps all night and the pad you brought is never thick enough to keep your arms from falling asleep no matter where you place them.

Morning finally came and we got ourselves together to begin our Triple Crown attempt.  At this point, all three peaks today still felt within reach despite some uncertainty about the approach to Gilbert.  But we’ll worry about that later…

So off we go to Kings with a full tank of gas and all pistons firing.  Up to Gunsight, across the short-cut and over to Anderson, making great time (by the way, that short-cut shaves 2 miles off the regular route up through Painter’s Basin). 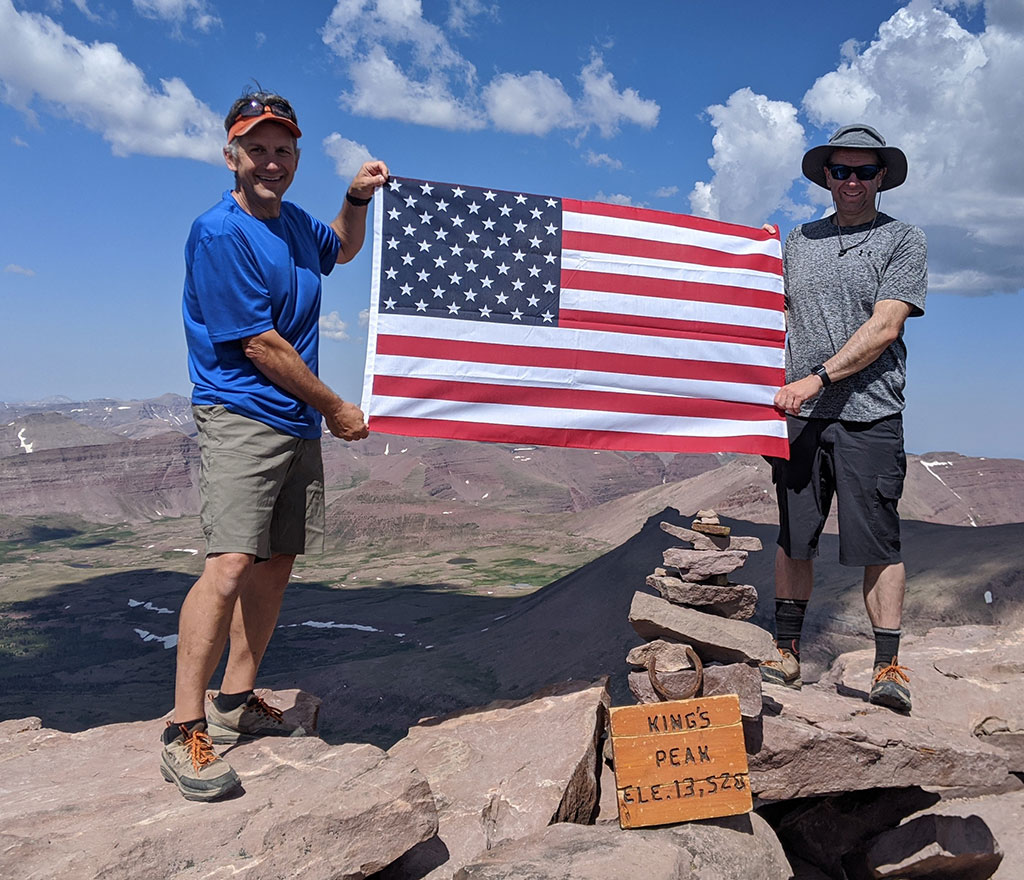 4 miles from camp, Chad and I reach our first peak of the day in 2 hours and 42 minutes.  We didn’t spend a lot of time up there… just enough to take in the view, snap a few pics and text our wives a quick status update. 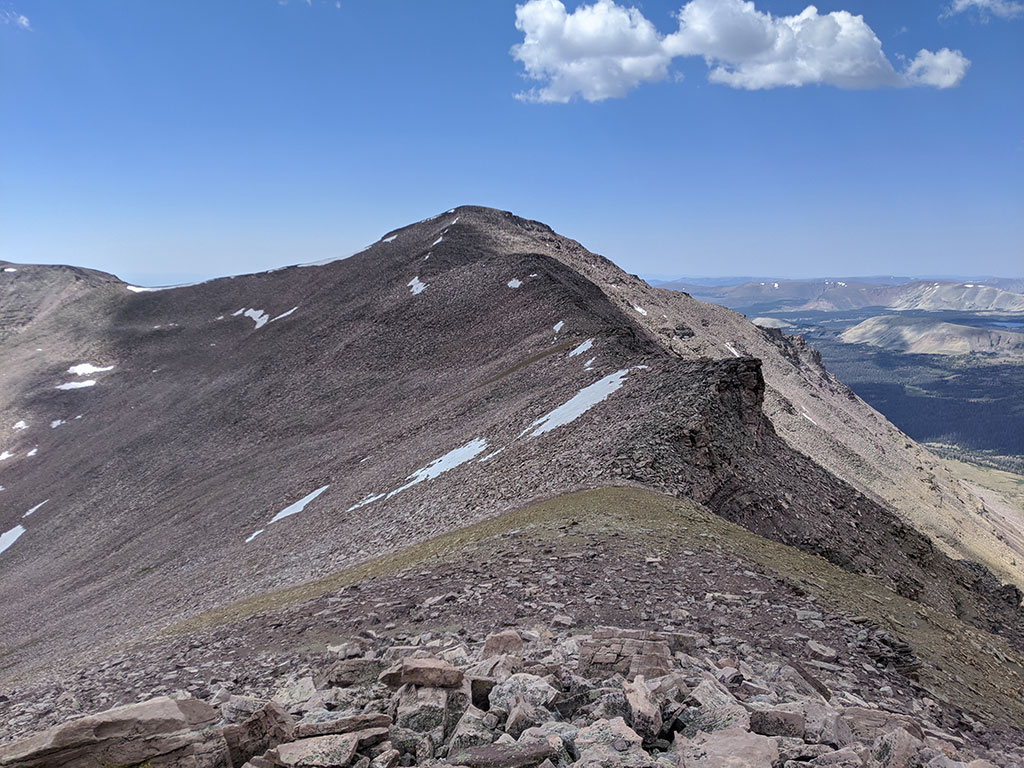 It’s less than a mile from Kings Peak to its south summit (.86 to be exact) and about 300-ish feet of elevation change from here to there, but it took us an hour each way because of so many loose boulders.  Every step was a careful one to avoid any unwanted injuries. 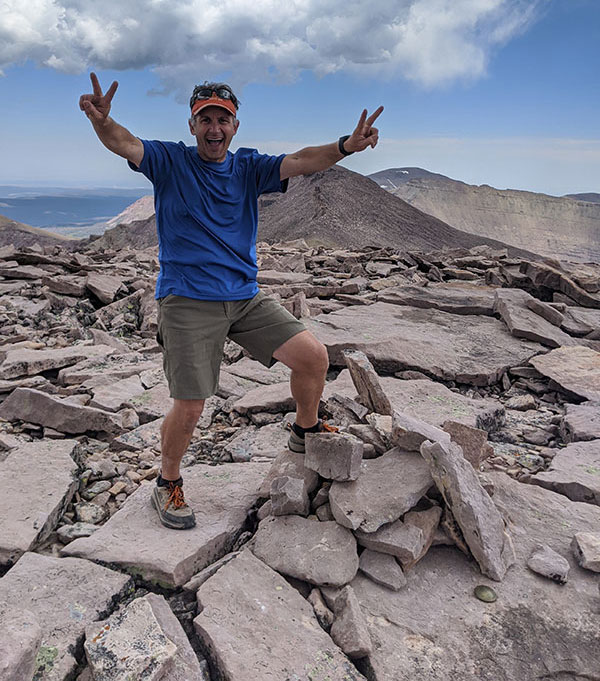 Peak #2 for the day…one more to go (or so we thought)! NOTE: too bad my arm was in the way, but you could easily see all 3 peaks from here: my elbow is covering Kings and Gilbert is waaaay back there in the distance.

We’re at 5 miles to this point, just under 4 hours and still feeling strong.  Another hour and another mile put us back on Kings before we head down and over to peak #3.

By the time we got back to Anderson Pass, we were so tired of the tedious boulder hopping that all we wanted was the fastest way down.  So we decided to take the route that’s called the Toilet Bowl.

I don’t think taking the chute was a good decision since this route may have been shorter in distance but definitely not in time.  A few big rocks also came tumbling down from people above.  At one point, I had to drop to my stomach behind a large boulder to avoid getting hit by another that whizzed by within feet.  This was the second time I had come down from Kings this way and still not sure how I feel about it.  However, I do think that set us up for success the next day.

When we arrived at camp an hour later than expected and more tired than anticipated, we just opted to have dinner and call it a day.  We were spent and not too interested in the possibility of coming down off Gilbert in the dark, on a route we weren’t entirely sure what to expect from.

The next morning showed signs of a strong recovery and another round of energy that we used to consider offsetting any regrets.  We decided to take baby steps toward Gilbert on this other route that didn’t go up from Dollar… and what we slid down in the Toilet Bowl the day before made this ramp to Gilbert look way easy now!

We called this route the “Gilbert Ramp” since that’s what it looked like to me the first time I saw it.  The only concern I had in seeing this from the bottom was getting cliffed off at what looks to be a choke point right where the two sides come together to form a V. 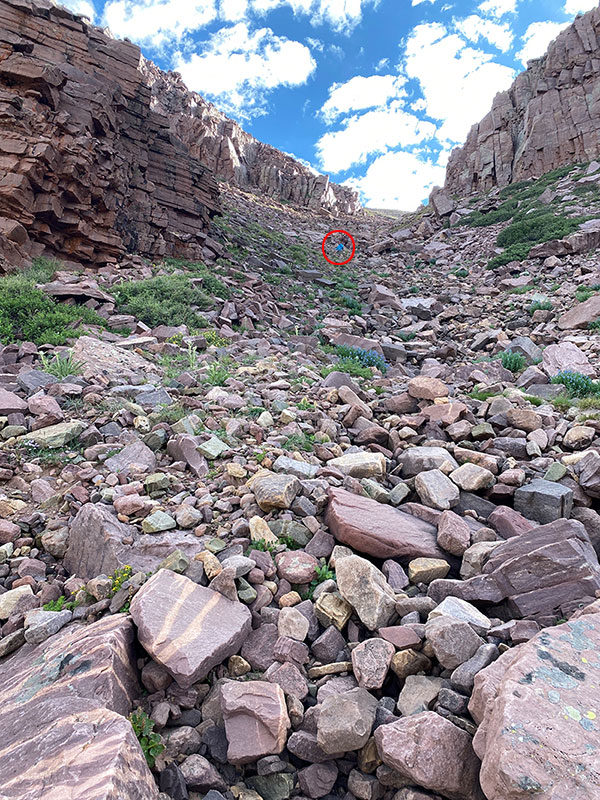 Turns out that’s not the case at all.  Here I am standing near the choke point in question and found it to be wide open and easily passable. 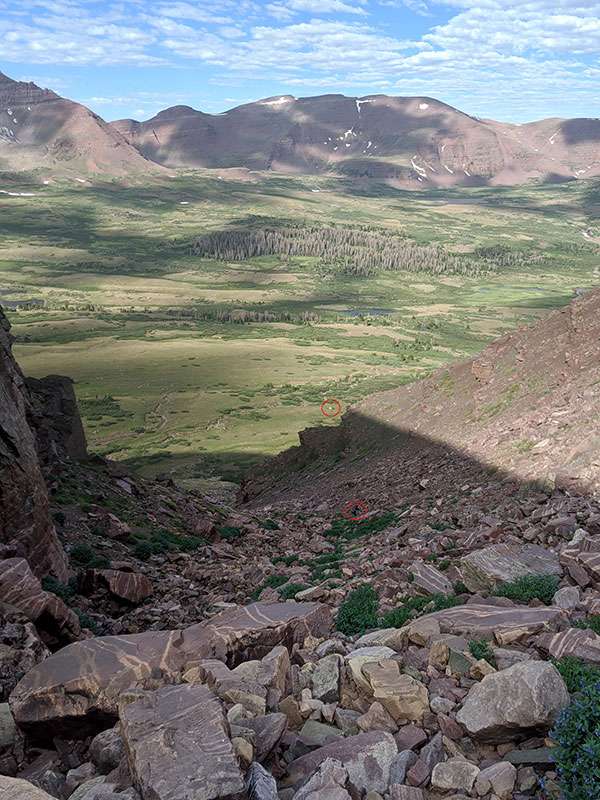 The rocks in this chute are also very stable, especially if you stick to the main water course.  It was like climbing stairs held in by sand as I followed the little dried-up waterfalls along the way.  Here’s the view looking down from about half-way up.  The near red circle is Chad, the far red circle is our camp. 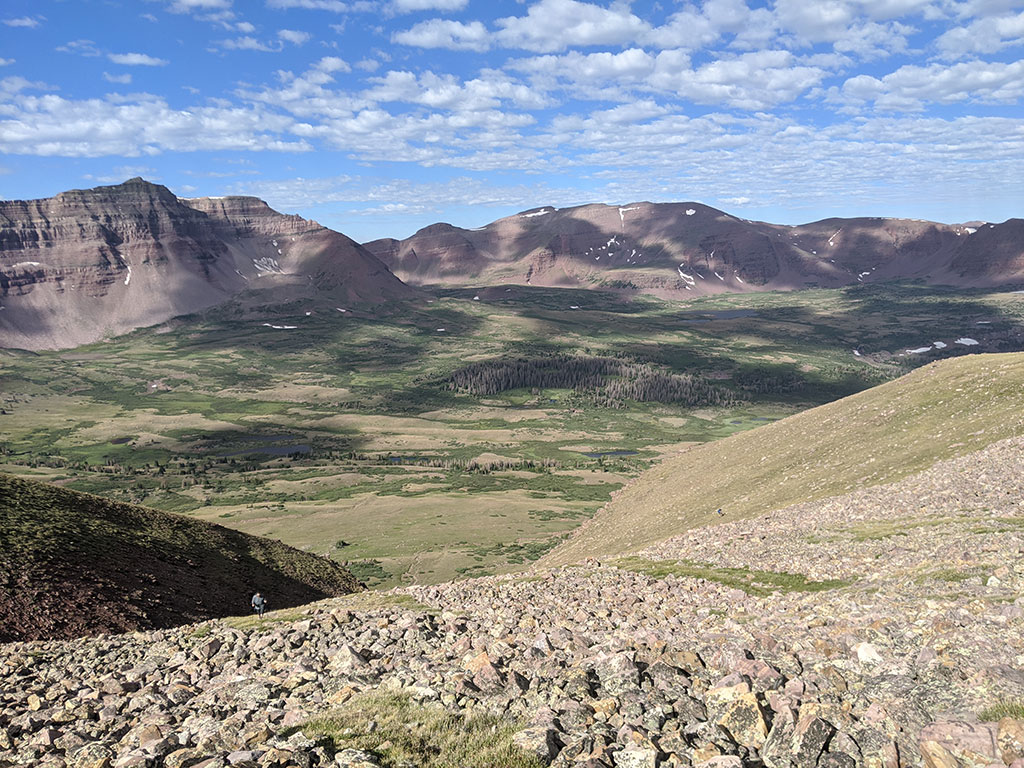 As we got to the top of the Gilbert Ramp with relative ease, there was no more doubt in my mind about getting this done.  We were going to bag Gilbert Peak on day 3 for at least a Utah Trifecta! 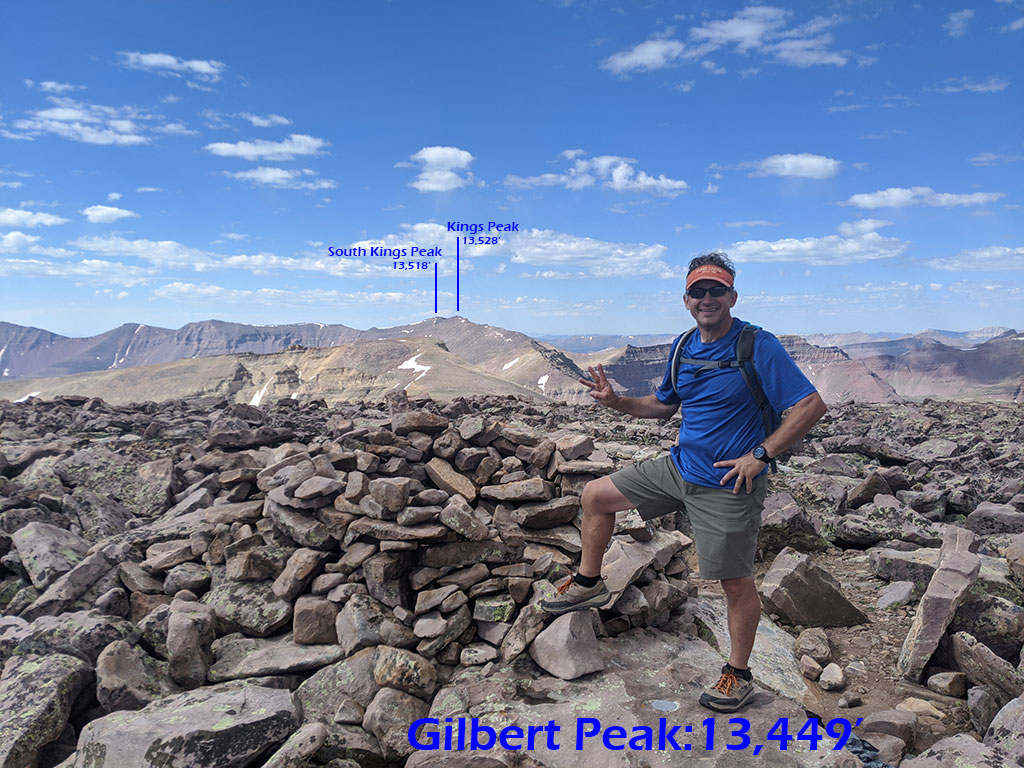 2 miles up, 2000’ of elevation and in 2 hours, we found ourselves on top of Utah’s 3rd tallest piles of rocks.  WOO HOO!!  We didn’t get the Utah Triple Crown this time, but I’m just as happy to have done a Trifecta!

With 3 in the bag from this trip, all that was left to do was head down, pack up and hike out… which we did the long way via the Henry’s Fork Basin Trail.  We both wanted to see what was along that route as it meanders around the opposite side of this basin.  It was a pretty spectacular walk that only added 2 miles and an extra hour over what it would have taken us had we gone out the way we came in.  It was definitely worth it! 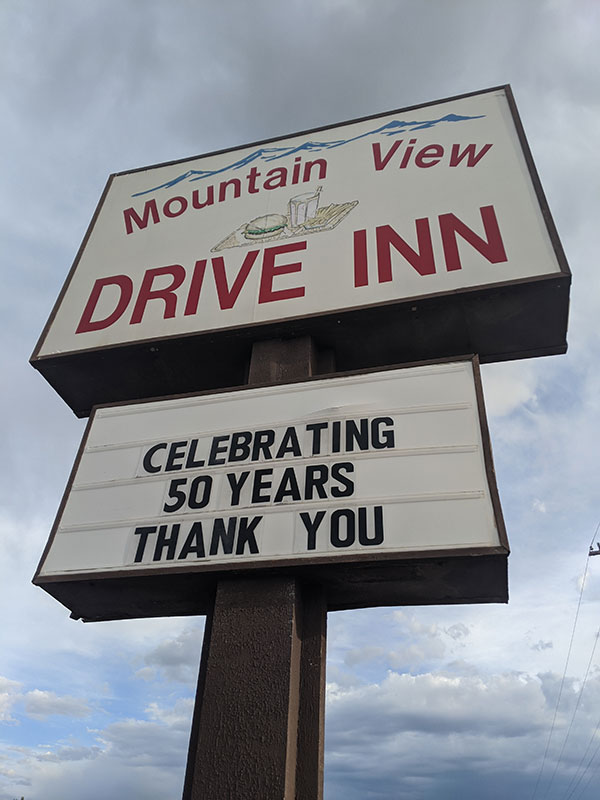 After doing 33 miles in 3 days and about 7,400′ of elevation mostly above 11,000, my mouth was watering for a greasy bacon double cheeseburger from the Mountain View Drive Inn.  Thank goodness they weren’t closed early because of COVID!

Looking back on this adventure, I know we could do all three in a day now with only a few small tweaks that would secure a future Triple Crown do-over: